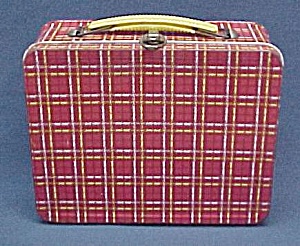 About a hundred years ago when I was in first grade I had a lunch box similar to this one in the picture. I don’t remember any yellow in it, but it was definitely a red plaid metal lunch box. In the world of school accessories, things like lunch boxes had not become big money makers that are product tie-ins to studios such as Disney. It was just a utilitarian box. McDonald’s had just opened and real people actually ate merely a hamburger and regular-size (i.e., small) fries with an 8 oz. Coke. We were a lot thinner back then.

Anyway, that was my lunch box. My mom used the thermos for coffee, so she would tape a nickel or five(!) pennies to the lid so I could buy milk at lunch time. HA! I need a part time job just to keep my teenaged son in milk–I might just try taping some pennies to a lunch box and see how that plays out when he returns to school next month.

I had a flashback to those days earlier today when I opened my lunch. I no longer carry around a metal lunchbox, and the contents of my lunch are a little more sophisticated these days: replace bologna with a delightfully rare roast beef–lose the mayo for a spicy horseradish on rye instead of Wonderbread, but the idea is the same. I pulled out my sandwich, and unwrapped the old school folding plastic instead of sealing ziplock, and BAM! it’s 1969 all over again.

One thought on “that sandwich smells like first grade”