I used to think that all the driving around I did was because I was always hauling children — mine, and other peoples’ kids — all over the place for the multitude of activities in which they participated (and by default, I ended up as team mom, concession director, stage mom, booster minion, ticket master, chaperone, chief cook, and bottle washer).

Which brings me to today’s mission: I drove into the city of Atlanta to visit a tiny statue squirreled away in a side altar. You know there has to be a story here because even I have my limits.

Well, not really, but there is a story. It started last month when I was in Miami for my birthday and took a little trip to the Ermita de la Caridad, the national shrine of Our Lady of Charity, patroness of Cuba. A dear friend accompanied me, and asked more questions than I could answer, which led to some more things, and suddenly I found myself exchanging emails with some very interesting people.

In one of the exchanges was a request to find anywhere in the world where there is a statue of Our Lady of Charity. Well, I knew there was one in the Archdiocese of Atlanta because of the annual celebration, but I didn’t know where. A friend of mine, a newly ordained deacon who happens to be Cuban, told me she was on one of the altars at the Cathedral.

Impossible, I think. I grew up going to that church. The altars are gold mosaics with bas relief images. No virgencita there, my friend.

So I went to the Cathedral of Christ the King to find out for myself. I walked into the beautiful cathedral and was suddenly transported back to my childhood when I was a student there. I stood in the back, taking it all in and letting that wonderful feeling of being home wash over me.

I realized that Mass was going to begin soon and I didn’t want to be a distraction (and I wanted to stay, too) but I also wanted to find the statue. Was she really at an altar? Was she in the hall behind the sacristy? I panicked a little, thinking I was going to have to get permission to wander around.

Suddenly, she revealed herself to me. It was so strange. I happened to be standing in just the right place, at just the right angle to look between the columns towards the altar on the right, and there she was, beckoning me. If it’s possible to make eye contact with a statue, I accomplished it. That’s quite a feat, too, cuz boy am I near-sighted. 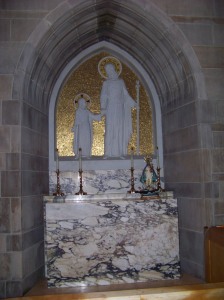 Do you see her? On the right?

Better? No? Here you go, then…

Isn’t she just like our moms, patiently waiting in a corner watching for when we get home?

This particular statue has a fascinating history. The Archdiocese of Atlanta has celebrated September 8th, the Feast of the Nativity of the Blessed Virgin Mary — also celebrated as the feast of Our Lady of Charity  by Cubans– since the 60’s when Cubans began arriving in Atlanta in large numbers. It was a beautiful way for these exiled Cubans, alone — very alone in this new country, to connect with each other, and connect with the community and the Church under the welcoming and comforting mantle of their beloved virgencita.

Many years ago, a woman, a young wife and mother, came to Atlanta with her small children to visit her husband who was incarcerated at the federal prison here. She had traveled with the statue, and upon learning that the Archdiocese was using only a painting of the Blessed Virgin, offered the good people from the office of Hispanic services the use of her statue for the annual event. Grateful, some representatives from Catholic Social Services went to her home to pick up the statue. After the celebration, they returned to her home with the statue and discovered that there was no sign of the woman. Further investigation revealed that there was no person by her husband’s name incarcerated in the area.

Her appearance…and subsequent disappearance have remained a mystery for decades, but thanks to that miraculous appearance, Our Lady of Charity has found a permanent home in the cathedral.