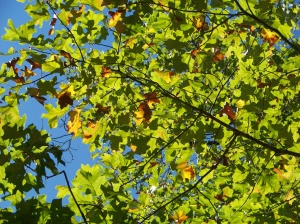 Fall gets a bad rap for heralding in winter and all the symbolism of death often associated with that. Phooey, I say. Winter has its charms, too. But this is about Fall, okay?

There’s something about the sun’s warmth on my skin when the air is cool that makes me feel like the whole world is a freshly made bed and I’m surrounded by cool linen and a warm down comforter.

Well, that was a bit much in the imagery department. It’s more like this: is there anything more delicious than a big fleecy college hoodie and shorts? Yeah, that’s more my comfy style.

But back to the sun. I am acutely aware of the sun in the fall. I think it has something to do with the gray, rainy weather that is typical of this part of the country in the fall. It’s rarely ever cold enough for an early snow (or any snow, for that matter) but the rain comes, and it brings a heavy pall with it.

Everything gets dingy and washed out, and the sky doesn’t so much turn gray as it loses any kind of definition. It’s just a big whiteout.

When the sun comes out I take notice. Like today. It was so bright it almost hurt.

The sun was kind of low in the sky and it made everything seem like it was filmed in Technicolor. The blue, cloudless sky was so blue. The green leaves were so green. And the sun?