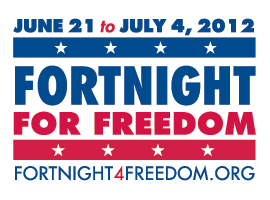 It’s about religious freedom, y’all, and it’s nothing to sit back and take lightly.

“The challenge facing you, dear friends, is to increase people’s awareness of the importance for society of religious freedom; to defend that freedom against those who would take religion out of the public domain and establish secularism as America’s official faith.  And it is vitally necessary for the very survival of the American experience, to transmit to the next generation the precious legacy of religious freedom and the convictions which sustain it.”—  Blessed John Paul II, 1995 Baltimore, Basilica of the Assumption

Read what the USCCB recommends…a prayer for religious freedom, videos, other resources here.

2 thoughts on “Fortnight for Freedom”