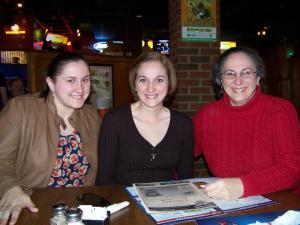 These are my girls. We’ve graduated from sippy cups and juice pouches to hanging out at Taco Mac, but one thing has been constant: I love them!

I’m at CatholicMom.com today, wondering about my changing role as a mom. With grown daughters, I’m not telling them to do things and making rules for them anymore. But I am wondering how to keep the conversation going.

Some months ago I had the pleasure of going out with my adult daughters, both beautiful women in their early twenties. I never thought I’d have to wrestle over picking up the bar tab with those two, but I have to admit, it’s rather nice to sit back and watch that little social ritual play out as we reached for the bill. In the end, I gave up, letting the oldest assert her well-deserved independence and treat good ol’ mom.

The girls saw my smile, and the love behind my wisecrack, “it’s about time.”

But there was a great deal of satisfaction in watching that playful scene. I was struck with the passing of time, and wondered how it came to this, that I was in a pub having drinks with my now grown daughters when just yesterday, it seems, I was desperately looking for the tops to the sippy cups.

Read about it here.

5 thoughts on “grown up sippy cups”