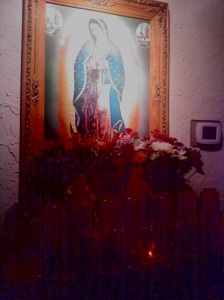 I took this picture in the chapel, where I promised to bring several intentions this morning. It was dark and I lit the first candle.

I left the house in a giant rainstorm, and for the first hour here in the chapel, I could see the driving rain through the big picture window behind the altar. At  mid-morning the gray sky and some ominous black clouds dimmed the light inside, and muted the green of the trees outside.

It was hypnotic and oddly comforting, like a heartbeat providing a steady soundtrack for my prayers. The rain eventually slowed down to a gentle shower, like it had spent itself in a passionate outburst. Having calmed down and recovered, it was getting down to the business of reviving all the parched trees and grass.

I couldn’t wait to go outside later and see how lush and refreshed everything would be. It’s like the earth is renewed and we’re given a new playground to begin again. 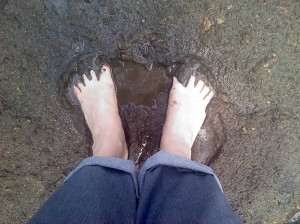 Yes, Margaret, I played in the mud, too.