…where I am reminded daily to treat my students with dignity and respect, and show a little love every once in a while. 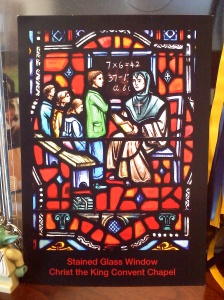 That’s St. Marguerite D’Youville. She keeps me honest in the classroom, kinda like the Grey Nuns did to me so long ago 🙂

On Wednesday night, God willing and the creek don’t rise, I’ll be attending a special Mass of Thanksgiving for the Grey Nuns of the Sacred Heart at the Cathedral of Christ the King in Atlanta. The timing of this event is Providential. I don’t go around looking for signs like Meg Ryan in Sleepless in Seattle, but well…I don’t discount them either. That date coincides with a very important deadline regarding a major change that I am discerning. More on that another time, but as you can guess, it involves my career in education.

Anyway, the Grey Nuns. These wonderful sisters impacted generations of folks in Atlanta and made all kinds of amazing contributions for which they will be recognized on Wednesday, and they will probably be all humble and stuff like you’d expect them to be. Sweeping statements about their profound impact on education are just that, sweeping and generalized. The truth is, these women impacted lives. Individuals. I know, because I am one of them.

I attended Christ the King Elementary School in the seventies. I have many fond memories of the place … the playground, recess in the parking lot, sneaking across the street to the Baptist church to buy Cokes, basketball games and assemblies and class Masses. Those were good times, but there are other memories, of the teachers, that are much more than just nostalgic remnants of childhood. Many of those women (and men) had a profound impact on my formation as a human being. A few, in particular, are directly to blame (yes, I blame them, it would have been easier to be an accountant) for planting certain seeds that led to my becoming a teacher.

I am looking forward to seeing some of these women after thirty-something years. I’d like to thank them, personally, for the impact that that they had on me – and tell them that their legacy lives on in me. It is both humbling and daunting to recognize that.  You see, unlike other professions, education is really on-the-job training from the moment a child enters kindergarten. By the time that child graduates high school, he or she has been shaped by a multitude of teachers – some good and some bad. I can state with absolute certainty that under the guidance of Sister Mary Margaret and then, Sister Jean, I never encountered a bad teacher at CKS. They weren’t even scary principals, and you were supposed to be scared of The Principal. Instead, these two women modeled a leadership that I hope to emulate one day as I seek administration.

Sister Mary Margaret was a pretty good basketball player. One of the highlights of my years at Christ the King was the annual faculty vs. student basketball game. The boys played against the fathers, but let’s be honest, the real draw was watching the sisters give the 8th grade girls a run for their money. Proof that experience is often a better tool than youth. Also, nobody was going to body check a nun, and I’ll bet they used that knowledge to their advantage. Sister Mary Margaret had skillz. So did some others. When I heard she was leaving at the end of my 7th grade year, my disappointment in not getting to play against her was profound.

When she left she did something that I thought was amazing. She sent each one of us, every student, a little card where she wrote a personal goodbye. I know this because we all checked to see if it was just a generic statement. It wasn’t. She took an amazing amount of time to leave each of us with an acknowledgement that she knew us. Maybe she did; maybe she asked our teachers to give her some insight. It doesn’t matter. I kept that little blue card for decades. I’m sure it got lost in a move somewhere, but I still remember the kind words she had for me, and how they have not only shaped my character, but taught me that every student under my charge, directly or indirectly, is a human being, not a statistic. I try to acknowledge that daily, especially when it would be easier not to do so.

Those were some big shoes to fill, and Sister Jean came along, and I’ll admit we were bitter at not having our beloved Sister Mary Margaret.  I imagine it was a tough act to follow, and she stepped in gracefully and did something that surprised us. She won our hearts with her smile. Really, I’ve never seen a principal smile that much. Isn’t there some rule about that?  I expect that she stepped into a difficult transition with the faculty, too.  Still, what we saw was her smile, and it was contagious.

On the 8th grade trip we broke tradition and traded a trip to Washington, DC for a much more exciting trip to Disney World. Sister Jean sat with me for part of the bus ride and she managed not to make that awkward (who wants to sit with the principal for 500 miles?).  Among other things, she shared with me her vocation story. It was an intimate moment that I treasured because it wasn’t a teacher/student thing, or an adult/child thing, but a heart-to-heart, one woman to another [young] woman. It changed the way I saw her, and all religious after that. It also started a long process of discernment for me, although I certainly didn’t have that label for it. My vocation, as it happens, turned out to be education, and while I chose the initials MRS instead of GNSH, I can assure you that in the classroom, my students are getting the full force of the Grey Nuns’ formation. Ha! Sometimes I’m a little sorry for my students.

So those initials are a pretty powerful little tool in my classes, especially when I taught high school. I don’t supposed the Grey Nuns are a widely known order, but there are people all over South Florida that know of them since I would often put the initials on the board. I can attribute this to Sister Dawn, who clarified on the first day of class that GNSH stands for Get No Sympathy Here.  That’s right. Tell me that wouldn’t scare you if you were a sixth-grader with a propensity for getting in trouble. I never did get any sympathy from her, just the expectation to do right. I still screwed up royally, but she had some crazy radar that honed in on me and set me straight again. Once, she figured out that I had some questionable reading material in my desk and called me out on it (M*A*S*H). Then she sent me home to read the offending book in front of my parents. That was slick. No phone call – making me face the music on my own. I learned about accountability from her, and if I didn’t learn it well enough in 6th grade, she beat it into me in 8th. Unquestionably, Sister Dawn was one of the best things that ever happened to me.

And finally, I have a soft spot in my heart for Sister Eileen, another one of those basketball playing nuns. Oh, Sister Eileen, if you only knew how often I have thought of you and prayed for you over the years.  Sister Eileen led me to God. She did it in a multitude of quirky ways that at the time were unknown to me, but that in retrospect stand out as seminal moments. I witnessed her stand on the beach for the first time. I know she had a profound moment with God, and right before I thought that maybe I should leave her alone and not ruin the moment, I wished for the same.

Sister Eileen was a scary broad. She was an old-school disciplinarian, but somehow, I managed to avoid her wrath (thank God for that small harbor—I seemed to piss off a lot of other teachers…Miss Salome? I apologize to you, too). Instead of scaring me, though, she gave me some responsibilities that really built me up. One day in science she was going to show a filmstrip about the natural world. It was accompanied by Cat Stevens’ song, Morning Has Broken. I was hesitant to do it since I was going to have to interpret the song in order to move the slides. That was my first experience with her stealth catechesis. “You’ll figure it out,” she said, and walked away. When I finished, she thanked me for doing a good job.

Later, Sister Eileen found out that I was taking guitar lessons, and immediately assigned me to play the guitar at class Masses. I loved playing the guitar – I still don’t like to sing in front of people. She would hear none of that. I played at all the Masses.  Yes, Sister. Right before graduation, she invited me to the convent to pick up something she had for me. I was flabbergasted when she gave me a beautiful gift – Sister Mary Margaret’s ukulele. Sister Eileen said she didn’t play any instruments, and thought I would like it. Like it? I’ve treasured it for over 30 years. I still have that ukulele, and it has been a source of joy for me. She singled me out for such a gift, not realizing that she had given me a greater one.