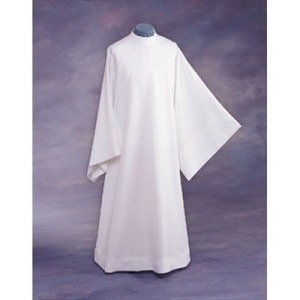 There are parts of my fair city that are…well…interesting. Lucky for me, I work in one of those quarters where there’s always entertainment going on. You know what I’m talking about as I talk around in delicate circles.

Let’s face it. It’s the bizarro world to my quiet, suburban/formerly rural homestead. The fact that we aren’t rural anymore should be an indication of the kind of gigantic growth experienced in Atlanta. As a side note, one of these days Birmingham is going to be part of metropolitan Atlanta due to the urban sprawl, but that’s not what I’m venting about today.

No. Today I saw an angelic vision. Or something.

Yes! Seen on my favorite corner (the one where I have been mooned and terrorized by bible thumping cultists) this morning was a gentlemen dressed in an alb.

I am certain that it was an alb because I was carefully looking at the hem and the pleats in the front. If that wasn’t enough, his fashion accessories were outright bizarre.

To his credit, his black and white motif was working, but still. Weird.

To compound things, the alb was hemmed a little too short, exposing his black dress socks accentuated by dazzling white plastic sneakers trimmed in black. It also exposed the fact that he was not wearing long pants (and it was like 22 degrees F). He didn’t strike me as a Scotsman, so I’d like to think he was wearing something else under there, but my mind refused to ponder that any further.

The ensemble was completed by a black hoodie and thick hockey gloves. And dark sunglasses.

I if was dressed like that I wouldn’t want to be recognized, either.