Day 16 – A picture of someone who inspires you.

This post is a little different. You may have noticed there is a big break between this entry and the last, and by way of explanation I’ll share with you that this was set to go on time, with a different text about the same person. It happens my dear friend Jeff Gillespie passed away when the post was due to go live, so I replaced it with this because he asked that I speak at his funeral Mass. 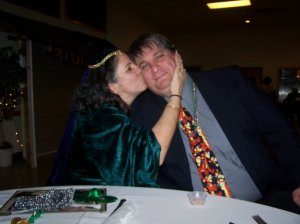 I find myself here today doing something that I never expected. Saying goodbye to Jeff is surreal…as I have spent the last decade saying goodbye to him. Blown kisses into the press box at football games…waves across fields after cross country meets…rushed goodbyes at the parish hall after Life Nights so I could get home…lingering goodbyes at my kitchen door after  long nights of conversation…only to find one more thing to talk about before retiring for the night.

There was always one more thing to say. I think he understood that and gave me the last word in our relationship.

By the way, Jeff, that was a pretty risky move since your mother shared with me some childhood pictures of you. There was a lot of plaid in those photographs, my friend. A lot of plaid.

It’s just as well, though. We all know you looked best in Black and Gold.

Jeff and I had a few shared experiences that gave us a common language. Both of us played basketball, and while we rounded out our athletic careers with other sports, he with football and me…to his amusement…badminton, it was really a different love that we shared in common where I gained much from Jeff.

I greatly admired his writing. For starters, he wrote masterful ledes, and I am way too long-winded and given to wild tangents to ever be able to write professionally, but he had plenty to say to me about that. He encouraged me, gently but firmly, and offered me the best advice I’ve ever had about writing. He said, “If you’re not going to be honest, then what’s the point?”

It goes beyond writing, of course. Jeff lived honestly in everything he did, and left his mark because of it. It’s easy to see the awards that he garnered in athletics and journalism, but in my estimation, the real merit is in the multitude of unseen gifts that Jeff sprinkled about in his lifetime.

Every encouraging word. Every pat on the back. Every smile and self-deprecating chuckle brought people, especially young people, into Jeff’s circle of love. If Jeff loved you, you knew it, and he wasn’t stingy about it.

Very early in our relationship I took it upon myself to find as many ways as I could to embarrass him with public displays of affection. I would demand kisses when I saw him. I always got my kiss, even though he quickly looked down and to the side and kicked the ground like a little kid. But here’s the secret: I know he liked it. I have photographic proof of such a kiss…and he’s smiling indulgently.

There was a certain shyness about Jeff that endeared him to me. One could say he was a man of few words, but that was the wrong assessment, believe me. He sat at our dinner table many nights pontificating about any number of subjects from sports to local politics to religion. It’s not so much that he was about few words as it was about being careful with the impact of words….Communication was, after all, his vocation.

I’d venture to say communication was his avocation as well, as he was always involved in some group of people, particularly our youth. His mere presence was a statement, and I witnessed how he moved within a group. That’s where one might get the impression that he was shy.

Jeff was an observer and a good listener, two skills sorely lacking in today’s world. He watched and noticed and listened carefully – with humility and charity. When he spoke, it was measured and in accordance with what he heard. As a result, his words tended to carry great weight and import. He knew his audience and how to speak to us, whether it was at the dinner table or a Life Night or in his column. He knew  “his people” and loved us.

It’s that love that I will carry with me. One of the last times we spoke I was teasing him about how loopy he was with the pain meds.  He was getting annoyed with me because he wanted to be serious and the meds were clearly knocking him out. Here’s a little quirky thing about Jeff that you’ve probably noticed. When he’s thinking and speaking he tends to close his eyes. This time, his eyes were closing, not because he was thinking of something deep to say, but because the waves of pain were abating with the strong drugs and he could feel himself drifting. I had to call to him to get his attention long enough to have him hear me say, “I love you.”

He opened his eyes wide, one might say a little out of character, but I understood. His eyes pierced my heart because in his strongest voice ever he told me, “I love you.” He punctuated it with his look, and I knew he was saying goodbye.

A few days later we were taking care of some rather important business that required a clear mind, and he was in serious pain and discomfort. When he was finally able to relax a little, he began drifting to sleep and the group started to move to the other side of his room so as not to disturb him. He stopped us, telling us to stay and mingle. Like we were at a cocktail party or something.

It made me laugh because it was typical Jeff. He was listening and observing and wanted us to mingle.

I like that send-off. He wants us to mingle. To get along. To share with one another. To love one another.

To live fully what he knew about our faith:

Because that’s what Jeff did.